Can so much wisdom and enthusiasm really be packed in such a petite package?

Don’t let Simran Sethi’s elfin frame fool you. It won’t be long until some clever cartoonist provides her super-hero avatar.

Thankfully, Simran Sethi is the emerging role model of female leadership – full stop. And St. Catherine University, aka St. Kate’s, tucked in the bucolic Mac-Groveland neighborhood of St. Paul, Minnesota, was just the place for her force to fly full throttle. 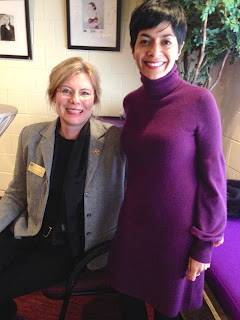 During a pre-lecture private reception on Wednesday, March 13, 2013, at the conclusion of her two-day scholar-in-residency in the University’s School of Business and Professional Studies, Sethi mingled easily with invited guests, demurring a handshake with a cheerful, “I apologize, but I’m getting a cold.” However, the cold’s symptoms were not apparent in either her hearty acknowledgement of St. Kate’s warm care for her, including kudos to Director of the University’s Leadership Institute, Mary Angela Baker, nor later in her one-hour public lecture.

Following the reception, Sethi disarmed the audience in the University’s packed O’Shaughnessy Auditorium. With the style and substance that define her career as a television producer and correspondent, freelance journalist, communications advisor and educator, Sethi’s speaking style electrifies.

Broadly speaking Sethi addresses environmental justice – her tool – deep knowledge and an uncanny ability to tell fact-filled stories about climate change and allied subjects. During the St. Kate’s lecture, she skillfully wove the highly personal stories and contributions of internationally renown, outstanding environmental, mostly female leaders like Judy Wicks, founder of Urban Outfitters, (of my hometown Philadelphia), and Gro Harlem Bruntland of Norway, former UN Commissioner and progenitor of the word sustainable, introducing the audience to the interdisciplinary career possibilities available in environmentalism.

Her topic was "Women's Work: The Role of Women in Sustainability," and she fulfilled its promise, highlighting the scientifically known differences between male and female leadership style. Pointing out that all embryo brains are female inter-utero until the eight-week gestation when a boy’s brain is bathed in the testosterone that naturally induces a more combative nature, she readily rattled off the reasons that female leadership lifts the whole ship.

“Females,” she underscored, “are engineered towards cooperation and collaboration…focusing on shared values and relationships, valuing equality overall… Not only do we excel in right brain activity of creativity and cooperation, but we also access and integrate the left brain facts and logic resources.” Men are sadly saddled with the strictures of hierarchical behavior that no longer serve the mandates that sustainability require: People, Planet and Pocket(book).

St. Kate’s is an emerging player in the education of women leaders. Though now co-ed, its mission, vision and values are firmly focused on educating and enlightening young women to their place at the world’s table, no longer the kitchen table. St. Kate’s programs and events are gaining international attention.

Two days prior to Sethi’s presentation and reception, I was a guest at yet another reception, hosted by the Master’s of Organizational Leadership program, for women political leaders from the African countries of Benin, Burkina Faso, Cote d'Ivoire, Malawi, Niger, Nigeria, South Africa, Sudan, and Togo, who participated in a day-long leadership seminar taught by graduate Organizational Leadership faculty, featuring special guest speakers including Elizabeth Kautz, Mayor of Burnsville and Verna Cornelia Price, Founder of Power of People Leadership Institute.

The African leaders were part of the International Visitor Leadership Program (IVLP), the U.S. Department of State’s premier professional exchange program. Through short-term visits to the United States, current and emerging foreign leaders in a variety of fields experience our country firsthand to cultivate lasting relationships with their American counterparts. Professional meetings reflect the participants’ professional interests and support the foreign policy goals of the United States.

The Minnesota International Center president, Carol Engebretson Byrne, IVLP representative, stated, “One of the reasons the State Department hosts emerging women leaders in Minnesota is because of the work of St. Catherine’s University.”